Some of you reading this might not even know that I have moved to Abu Dhabi and for that I apologise. As is usual with me, everything happened very quickly and I had little time to organise my life before I left South Africa. The decision to move here was a difficult one. I was finally settling into life in SA and I was happier than I had been for a long, long time. The decision was mostly influenced by financial factors and my desire to see more of the world. Earning a teachers wage in SA is just plain depressing, and obviously, the fact that the UAE is tax-free helps a lot too. So, in the end, I decided to bite the bullet and move, knowing that the holidays are more abundant than in Korea, the flight time is far less and the money is better helped to make my mind up.

So onwards to life in Abu Dhabi! Well firstly I should reiterate what everyone knows, but this place is so hot you cannot even begin to imagine. The first two weeks here were exceptionally hot – with temperatures that did not go below 33 degrees Celsius, ever. The usual daily temperatures when we were out and about were in the high 40’s, with the real-feel index usually into the early 50’s. I can’t even begin to explain what a real-feel of 53 degrees feels like, but I can say that if stuck outside/between buildings for more than a few minutes my brain started to send alarm bells ringing and I got quite panicky because I felt like I might actually die at any moment. Luckily, as this was the very end of the hottest months (July/Aug) the temperatures have since started to cool down, making the 30-40 degrees feel extremely pleasant.

I got my job through an agency in Cape Town called SA-Recruitment. Everything happened very fast and it went very smoothly. The paperwork needed for the job and the visa is quite tedious so I decided to let an agency called DocAssist do the dirty work for me and save me the stress. I landed a job at Abu Dhabi International School and will be a Prep teacher which is also known as Kindergarten 2 and is the equivalent of Grade R in South Africa. I am excited for the change of scenery in my classroom!

Landing in Abu Dhabi I was greeted by the Gold Service, who the school had arranged for the new teachers to escort through the airport. It turns out that there were about 8 others on the same plane as me, all going to the same school. All of us were loaded onto a bus and taken to a hotel where we were told we would stay for 9 nights! They gave us a packet of basic groceries each and said the bus would collect us in the morning. Fifteen days later and I am still in the hotel, but we are finally moving out tonight.

The hotel was a real treat and a nice way to start our time in Abu Dhabi. It is a business hotel called the Centro Al Manhal Rotana and is right around the corner from a big mall called Al Wadha. We were allowed to have breakfast every morning, which was an amazing buffet. We had free wifi and, of course, housekeeping. Spoiled!! The bar in the hotel has happy hours from 12:00-00:00 as well as Ladies Nights on Thursday, Friday AND Saturday! All-in-all, a pretty sweet deal.

For a few days after our arrival more people arrived from overseas and were also placed in the hotel. We all get on great and it’s been a really nice way to get to know each other. Now that we are moving into our apartments some of us have been split up, but tonight a group of 8 of us will all be moving into the same apartment building.

The school has built a new campus and we are the first teachers to teach in it. It was built in only 9 months and it is gorgeous. Unfortunately, as it was not finished in time the start date was pushed back twice, meaning I have been here for 15 days and still have not started teaching. However, we are due to start this Sunday (in UAE the weekends are Friday &amp; Saturday). We have been pretty busy despite not having to teach. We have been planning lessons, arranging our classrooms (which are huge!), attending meetings, observing classes at the “old” campus etc. I think we are all eager to start though, as being here in a hotel and not teaching makes it not feel 100% “real” yet.

On our first weekend we all went to the Sheik Zayed Grand Mosque which is a major tourist attraction. It really is stunning, but I would recommend going when it is not so hot because you mostly walk outdoors. I plan on going back when it is cooler, and also in the late afternoon so I can see it in the afternoon light, sunset and then lit up. I am lucky that I get to drive past it daily on my way to school.

When you get to the mosque you have to follow the signs to where they issue you with an abaya – a black dress that covers to your wrists, ankles and your hair. The mosque also houses the worlds largest handmade carpet, which I thought was a pretty cheesy claim to fame until I actually saw it – wow! There are loads of security guards wherever you go and they are always watching you… there are so many rules there that I felt nervous I would do something wrong and that was the only negative aspect about the experience. You cannot wander around aimlessly, you have to follow a set route. You cannot stand with a group of friends and put your arms around each others shoulders for a photo, nor can you do any gestures or poses (e.g. thumbs up or “V” sign) for photos. You have to simply stand with your arms at your side. We saw some tourists who took a photo of a lady making a prayer sign with her hands get shouted at by a guard and forced to delete the photo. In a way I can understand that it is a very holy place and that respect should be given, but I did find the many rules a little stifling. 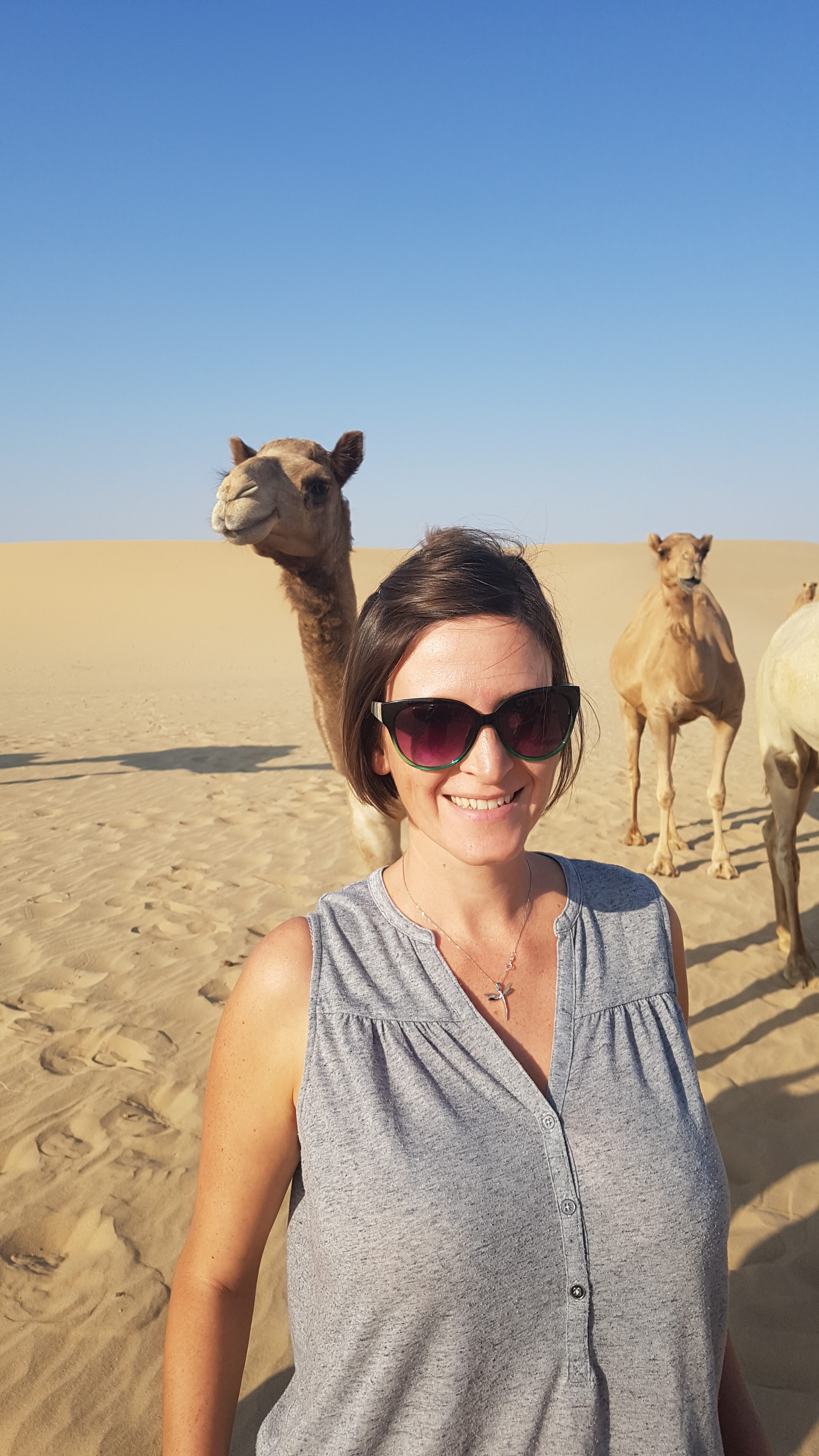